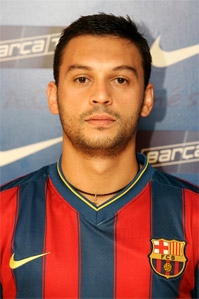 Brazilian Saad will join Barça Senseit for season 2008-09 after playing last season with Móstoles. Saad is a left-footed winger with an Italian passport.

Saad Assis was born on 26 October 1979. The Italian-Brazilian left-footed winger played his first futsal games for Atletico Minero. There he won one Brazilian league title and three Mineros championships. He played one season with Brazilian side Ullbra before moving to the Spanish league.

He signed for PSG Móstoles in 2001 where he played for only one season. Saad returned to Brazil where he played for Banespa and then, again, for Ullbra. He returned to Europe for the 2005-06 season but this time to Italy and Luparense. He won an Italian Cup and became a nationalized Italian, which means he is no longer considered a foreigner.

After playing last season once again for Móstoles, Saad has signed for Barça Senseit for three seasons. He has said he feels very happy with the Catalan club: “I love this club. I’m a fan of FC Barcelona. It’s a pleasure to have signed for FC Barcelona and enjoy the club”.