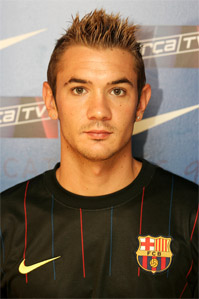 The young goalkeeper learned his trade at Caja Segovia and Polaris World and his experience at the highest level will serve him well when playing for Barça Senseit.

Cristian Domínguez was born in Madrid on August 27, 1982. Aged 16 he signed for Leganés where he spent two season before moving on to Caja Segovia. At the start of the 2003-04 campaign he made another move as he signed for Polaris World Cartagena, where he matured as a player while becoming a key member of their team.

The withdrawal of the club sponsor of the team allowed Cristian to move on, because if that had not happened it would have been very unlikely that he could have left. Another opportunity arose for the highly-rated custodian, however, when Barça moved quickly to sign him in the summer of 2007 and he no doubts that moving to the Blaugrana was the right move. "It is an ambitious project," he said. "They are building a side to win trophies from the start and that excited me. It is a project that mexies youth with experience."

Despite his tender years, Cristian has played for many years at the highest level. He is a player that is highly-rated now and is expected to improve even further in the future, thanks to his superb technique.