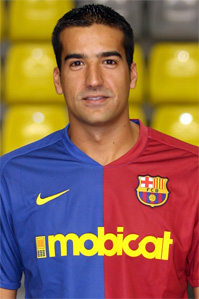 Juan Carlos Lˇpez was born in Barcelona on December 2, 1981. He started playing futsal at school from a very young age, having always been a huge fan of all kinds of football.

He has been a Barša fan since the day he was born, and considers the day he joined the club at the age of 16 to have been the moment that his ‘dream came true’. He is a season ticket holding member of FC Barcelona, the club where he has spent all of his playing years.

After playing at youth level, he went up to Senior B for the 200-01 season and played Divisiˇn de Honor futsal the year after that. Two years later, Barša were relegated, and it was not until last season, 2005-06, that they finally made it back into the top flight again. Juan Carlos says that you can learn from any team mate, although two that will always stick in his mind are Alesio and Jordi Torres.

His career has occasionally been hampered by injuries. He suffered a serious knee injury in 2005, and missed half the season because of it. But he still felt part of the team when they won promotion, something he remembers as one of the finest moments of his career.