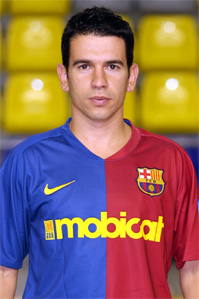 Wing Jordi Sánchez has signed for Barça Senseit in the summer of 2008. At 30, he has played for over ten years at the highest level of futsal. He is returning to Barcelona after four years away.

Jordi Sánchez was born in Barcelona on 5 October 1977. He has been involved in sport his whole life but his first sporting steps were not taken with a futsal ball at his feet. Jordi was a great fan of basketball and, despite not being especially tall, he dedicated his early sporting life to the game. In the streets, however, he began to take an interest in futsal and changed the nets of basketball for the net of the futsal goal.

Sánchez made his name as player and person in Catalan futsal. His first professional team was Indústrias Garcia, where he played for four seasons and was named best new player in the LNFS for season 1998-99. Then he played three seasons with Miró Martorell, with whom he won three Catalan Cups in a row. His last Catalan side saw a return to Indústrias, now known as Marfil Santa Coloma, where he played for the season 2003-04.

Polaris World Cartagena availed of his services in 2004 for three seasons. The later loss of the Cartagenian sponsor forced the departure of quite a few players, as was the case with Sánchez. Armińana Valencia was his last club before signing for Barça Senseit. The plans put in place by Barça Senseit are what attracted Sánchez to Barcelona: “Barça have great plans for the future to win titles and this is a great motivator”.