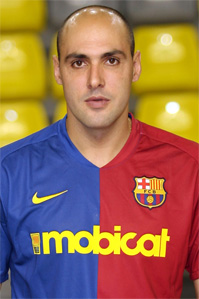 Javi RodrÝguez is the most important active futsal player in Spain.

A glance at his achievements shows that he has won everything in the game, both individually and collectively, and one of the few things left for him to do is help a recently promoted side consolidate its position in the top flight and once again demonstrate what he is capable of doing in this sport. That is why he left the club where he enjoyed most of his greatest successes, Playas de Castellˇn (where he played for nine years) to lead FC Barcelona’s ambitious new project.

His career in the game goes back to his school days, where he first took to the futsal court aged just six. As a youngster he was also an acclaimed basketball and football player, although he claims to be an all-round fanatic of every kind of sport. Aged 18, he made his debut in Division 1A (what is now the Division de Plata), and soon caught the eye of Ind˙strias GarcÝa, where he played for five years. From there he moved on to Playas de Castellˇn, where he matured as a player and won everything an elite sportsperson could hope to win.

His proudest moments have come playing for the Spanish national side, of which he is captain. He scored the winning goal in the World Cup final in Guatemala, and also excelled at the following edition in Chinese Taipei. He now has the responsibility of leading Barša on his shoulders, his hope being to transform the side into one of the strongest in the country.