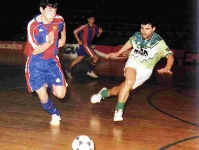 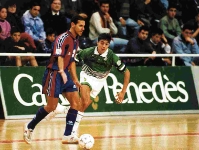 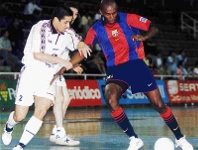 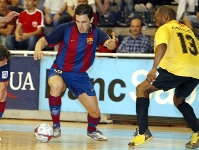 The futsal section was officially founded in September 1978. But there had already been a team wearing the Barēa strip since two years before that.

They were a group of former professional footballers that had started getting together to play futsal matches. This was just when the sport was starting to gain in popularity around Catalonia, in the late 1970s. The first official tournament was the ‘Christmas Cup’, of which Barēa was proclaimed champion.

In September 1978, FC Barcelona officially inaugurated the new section, and joined the Catalan Third Division. The team got off to a spectacular start, winning promotion in its first season. Progress was rapid from there on. The team was promoted from the Second to the First Division in 1979-80. And once in the top flight, things continued to go well, and in one of its first two years among the elite, Barēa won the championship.

The following season, the Board of Directors decided to dissolve the Futsal section. Four years later, following the changes to the national league structure and the creation of the Division of Honour, the section was reconstituted. Things once again got off to a positive start. In the 1987-88 season, Barēa won the Copa del Rey, and retained it the year after. The next season, 1989-90, FC Barcelona won its first continental title, the European Cup Winners Cup. In the final in the Palau Blaugrana, Barēa defeated Italian champions AC Roma 3-1.

After three years of great results (Barēa finished third in the following two seasons and reached the 1993-94 semi finals) the side started sliding down the table. This had a lot to do with financial factors, with the club severely cutting its futsal budget and the team being made up of players developed through the youth system. Despite the gallant efforts of the youngsters, Barēa were relegated in 1997-98. After two seasons in the division below, they bounced back up, but only held their place for three seasons before dropping back down in the 2002-03 season.

This time, Barēa struggled to get back into the top flight. With Xavi Closas on the bench, the team finished second in the regular season, and despite beating Arenas Gįldar in the first round of the play offs, eventually lost out to Muebles Caloto. Things went worse the year after. Although ending an excellent season at the top of Group B, Closas’ side suffered shock elimination at the hands of Gestesa Guadalajara. It was the season after that, 2005-06, when Barēa finally made it back into the Division of Honour, winning the decisive play off against Canary Islanders Galdar.

But it had not been easy. With former Barēa player, Catalonia manager and Barēa technical secretary Marc Carmona coaching the side, Barēa had made it as far as the play offs after finishing runners-up in their group. In the first round of end-season matches, Barēa comfortably overcame Grupo Pinar Cordoba, but found things considerably harder in the following round against Colegios Arenas Galdar. The first leg in Catalonia ended 2-2, and Barēa had it all to play for in the difficult return leg in the Canaries. Barēa had to deal with an extraordinarily hostile atmosphere, and did so in style, to win by a dramatic 5-4 scoreline that secured promotion.

With the side back in the highest division, the Board of Directors it was time to take the team into the elite of the sport, one of the items that had figured on the new leadership’s manifesto ever since they had come to power. The section was immediately turned professional, and a new sponsor was brought in to help finance operations, Senseit, the brand name used by mobile telecommunications company Laiwa. The club opted to bring in some of the biggest names in the sport, including Javi Rodrķguez. The finest player in Spanish futsal, and captain of the national team, Rodrķguez was attracted by the new challenge and left the club he had represented for nine years, Playas de Castellón to lead a project that promised so much. The objective for the first season was to consolidate the club’s position in the top category of the Spanish game, although adaptation to futsal at the highest level was never going to be easy.