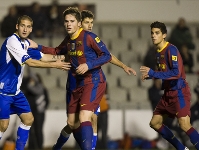 On December 1, 2010 the Copa Catalunya for the previous season (2009/10) was played in a 3-way format, with Espanyol beating Barça and L’Hospitalet.

Two days after the historic 5-0 against Madrid, Barça played the Copa Catalunya in Sabadell with a squad of players mainly from outside of the first team.

They played the first 45 minutes against Espanyol and the parakeets won 2-1 and then beat l’Hospitalet ( 1-0 ) to secure the 09/10 title. Barça beat the Division 2B side with goals from Dos Santos and Soriano, but to no avail.