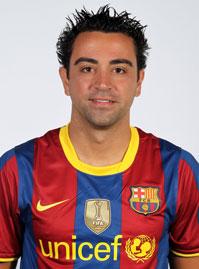 Xavi has spent all his footballing life at the Nou Camp, having joined Barcelona when he was only 11 years old. The progress he made was always very quick and in season 97-98 he moved up from youth team to Barca B.

In Barēa B, he became the brains of Jordi Gonzalvo's team which won promotion to the second division.

Xavi's dream of making his official debut with the first team squad became true when he played in the Spanish Super Cup against Majorca in the summer of 1998. He was in the starting line up and scored: a better debut he could not have asked for. Xavi also played an important role in the league-winning season of 1998-99 with Van Gaal as manager, most notably with an important goal in the Nuevo Zorrilla, which turned round the team's fortunes.

Season 1999-2000 was a good one for Xavi as due to the injury to Guardiola he was the first choice number 4 for a large part of the season. After the legendry captain left for Italian football he became the playmaker of the team and has continued to demonstrate the full range of his talents in this position.

With Van Gaal, Rexach, Antic, Rijkaard and Guardiola in charge of the team, Xavi has always been a key member of the team - a fact made clear by the 300 official games he completed whilst still only 25 years old.

With Rijkaard, Xavi has shown that he can not only play at the heart of midfield, but is also more than able to cover any position in the center of the team, an ability reflected in the fact that he was the most used player in the League winning 2004-05 season, playing 36 games in all.

Xavi will never forget 2 December 2005. While training at La Masķa, the midfielder tore the ligaments in his left knee. His recovery was swifter than expected and within five months he was playing again. On 29 April 2006 against Cadiz, Xavi once again “felt like a footballer ". He was back in time to celebrate the League and Champions League titles with his team-mates.

In the last two seasons with Frank Rijkaard in the dugout, Xavi was one of the players most used by the Dutch manager. Plus in the 2007-08 season he set a personal best of 7 League goals, almost doubling his previous highest of four in the 2001-02 and 2003-04 seasons.

In Guardiola’s first year, Xavi Hernįndez extended his goalscoring record. He beat his personal best, getting 10 in 54 games. Along with Iniesta, he formed part of the central playmaking duo that contributed so much to the treble winning season. Xavi led the side that won the 2009-10 league title with an historic 99 points.

During the 2010/11 season, the midfielder recorded a new record which he continues to stretch as the Club’s leading appearance maker. On January 2nd 2011, Xavi equalled Migueli’s record of 549 appearances when he played in the 2-1 win over Llevant at the Stadium. On winning the league in 2010/11, Xavi equalled the record of six league titles for Barēa previously shared by Ramallets and Guardiola.

In addition Xavi Hernįndez has also been a fixture in Spain’s national side. He played in the 2002, 2006 and 2010 World Cups and in the 2004 and 2008 European Championships, and in the latter was chosen as best player as Spain picked up the title.

His World Cup winner’s medal in 2010 completes a truly astounding list of honours. Xavi was the undisputed playmaker par excellence and the best passer of the competition.

Xavi is the playmaker of the team in every game and shows no nerves whatsoever as he guides the team with an extraordinarily cool head. Since taking on the mantle of playmaker at Barca he has shown incredible vision on the pitch. He is another example of the good work being carried out in the youth teams of Barcelona, especially in the position referred to as number 4 and as he has matured he has shown an increasing ability to adapt himself to different positions in the midfield when his manager has called on him.

His passing to the forwards and his ability to take the pressure off and protect the ball better than almost any other player around, have turned him into one of the focal points on the pitch. He also stands out for his defensive capabilities and his capacity as a ball winner.

In addition he has shown himself more than able at dead ball situations, where his potent shot has brought a number of important goals.

Xavi will always remember December 2, 2005. During training in front of La Masia,the Terrassa-born midfielder suffered a bad injury to his left knee as he ruptured his ligaments. Within five months he was back in action. On April 29, 2006 he returned to play against Cįdiz and stated "I feel like a football player again". He was able to celebrate winning the title and the Champions League with the rest of the squad.  The midfielder from Terrassa was one of the final candidates for the FIFA WORLD PLAYER AWARD 2008, finally finishing in fifth place.

The Barēa playmaker was a regular in Luis Aragonés' Spain team during the 2006 World Cup in Germany, where the team progressed to the second round before being beaten by France.