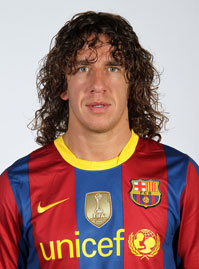 In the 2009-10 season he won his fourth league title. The captain is incredibly consistent and is one of the defenders most used by Pep Guardiola in the heart of defence.

Puyol was less fortunate in 2010/11, where despite winning his fifth league and third Champions League, he only played 27 matches (his fewest appearances since 2000/01). Towards the end of the season, he underwent arthroscopy on his left knee to extract loose cartilage from his femur.

Carles Puyol is also a fixture in the Spanish national side, with which he played in the 2002, 2006 and 2010 World Cups and in the European Championships in 2004 and 2008. In the latter he was key figure as Spain won the title in Vienna.

In the summer of 2010 he won the only club or international medal that was missing from his collection. One of the cornerstones of the team, he played in all seven matches and scored the only goal of the semi-final against Germany – a header similar to his goal in the historic 2-6 victory in the Bernabeu.