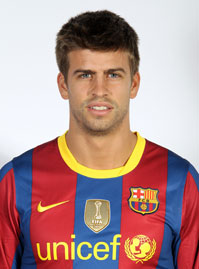 In his second year he consolidated his reputation as one of the best central defenders in the world. He formed a regular partnership with Puyol and won his second league title with the Club.

In the third year, Piquť became a more important part of the centre of defence due to injuries to Milito and Puyol and Abidal’s illness. He played his largest number of official games in 2010/11, with 51 appearances.

A permanent feature of Spain’s World Cup winning defence, playing every minute of every match. He was also a key element in Spain’s creative football.