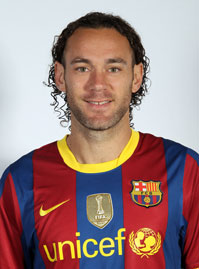 Gabriel Milito is the twentieth Argentinian to wear the Barça shirt. He is a central defender who started out at Independiente in Avellaneda, and then spent four years at Zaragoza before coming to the Camp Nou.

Gabriel Milito was born in Bernal (Buenos Aires), on September 7, 1980. He came up through the youth ranks at Independiente, making his top flight debut aged 17 with the Avellaneda based club. 'El Mariscal', as he is known, led the side’s defence despite his young age, but his promising future was almost cut short by a serious injury. He tore cruciate ligaments in his right knee in 2001 and was out for nine months. And shortly after his return, he was injured for another four months, this time with a broken meniscus in his right foot.

Once he was back to full fitness, Gaby Milito was one of the main reasons for Independiente’s Opening Championship victory in 2002. He was named Argentinian Player of the Year and in the summer of 2004 made his move to Spain.

Milito was originally headed for Real Madrid. However, before signing his contract the club’s doctors concluded that he was not fully recovered from his knee injury and warned against signing the player. Milito went instead to Zaragoza, and that season won the Copa del Rey at Montjuďc, ironically beating Real Madrid. Later that year, Zaragoza also won the Spanish Super Cup and Milito was heralded as one of the finest defenders in the league. In four years at Zaragoza, he never failed to please.

In the 2005/06 and 2006/07 season, Gaby was joined by his older brother, Diego, at La Romareda. The Milito brothers were the stars of a side that won back to back UEFA Cups.

In the 2007/008 season he became a fixture at the heart of Barça’s defence. He played in 27 League games, scoring a goal and consistently turning in fine performances. After the second leg of the semi final of the Champions League in Manchester, Milito damaged cruciate ligaments in his right knee, and therefore missed the entire 2008/09 season. After 19 months out injured, Milito made his official reappearance on 5th January 2010 in the Spanish Cup tie against Seville. He made a triumphant return from serious injury. He played 11 league games in 2009/10, and renewed his contract until 2012, and played 10 more league games in 2010/11.

Gaby Milito has also found his way into the Argentina national team. He made his international debut in 2000 and played at the World Cup in Germany in 2006 and in the 2007 Copa America, where he was a regular feature in Alfio Basile’s side, which reached the final.

The Argentinian international, known as 'el Mariscal', is a respected, authoritarian, imposing and well-positioned centre back. He also a skilful playmaker and can help in attack. Although he is not particularly tall (1.79 m.), Milito is good in the air and can be dangerous from dead ball situations. He also has a very strong personality, and is a natural leader.