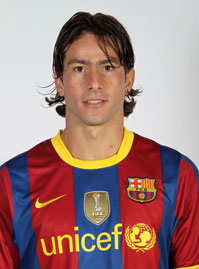 Left back Maxwell came to Barça. The Brazilian defender, signed from Inter Milan, has plenty of experience of European football, having also played for Ajax Amsterdam.

Born in Cachoeiro de Itapermirim (Brazil), on August 27, 1981, Maxwell first played top flight football for Cruzeiro, and impressed so much that he was soon on his way to Europe and Ajax Amsterdam in 2001.

Maxwell was only 20 when he came to Europe, but age was no obstacle to him earning a regular place in the Ajax starting line up, and in that 2001/2002 season was considered one of the biggest rising talents in the game. His time in Holland reached its peak in 2004, when he was named player of the season in the Dutch Eredivisie. With Ajax he collected two League, one Cup and one Super Cup medals.

In April 2005 Maxwell he was sidelined for eight months with a serious knee injury. But once he was fit again, plenty of major clubs came knocking on the door. After three and half years in Holland, in January 2006 he was finally snapped up by Inter Milan, although at first he was loaned out to another Italian club, Empoli, in order for him to be able to adapt to 'calcio' in time for the following season.

The next summer Maxwell joined the Inter first team, where he would stay for three seasons from 2006/07 to 2008/09, winning the Serie A title each year, as well as two Italian Super Cups. He played a central role in all of those campaigns, although in his final year, under José Mourinho, he was given somewhat fewer opportunities.

In his first season with the Club he made a great contribution. He demonstrated his versatility on the left flank and was an important player in the successful league campaign.

History repeated in 2010/11, where he played a total of 41 matches, 5 more than his first season, and also scored his first ever goal for Barça, against Ceuta in the cup.

He is an under 23 international for Brazil.

Maxwell is the typical Brazilian left back, in that enjoys getting forward. But following his time in Italy, he has improved defensively. Much of his game is based on his physical strength and powerful runs up the wing. Although his natural position in on the left of defence, Maxwell is a versatile player and can play further upfield if called upon. He also has a powerful left-footed shot.