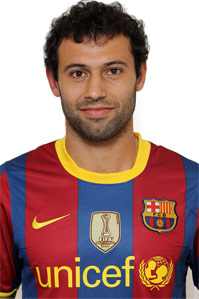 Javier Mascherano was presented as an FC Barcelona player on August 30, 2010 after the authoritative midfielder completed his move from Liverpool.

‘El Jefecito’, as the Argentinian is affectionately known, is a player who has earned the respect of all wherever he has played. He made his professional bow under Manuel Pellegrini at River Plate after having played for Argentina in a game against Uruguay.

After impressing with River for two seasons Mascherano moved to Corinthians in Brazil and won the league title. That form alerted European clubs and he was on the move once again when West Ham United secured his services. The London club bought him and his Corinthians team-mate Carlos Tévez for a combined fee of $35 million.

In January 2007 he was on the move once again as he headed to the north west of England to join Liverpool, but missed out on the Champions League encounter with FC Barcelona that spring. At Anfield he formed a lethal midfield trio alongside Steven Gerrard and Xabi Alonso. During his three-and-a-half years at the club Liverpool reached the Champions League final but failed to win any silverware.

On August 30, 2010 Mascherano signed a four-year contract with FC Barcelona. Signed to compete for a place in the centre of midfield following the departure of Touré Yaya to Manchester City

Mascherano is the only Argentinian player to have won two gold medals at the Olympic Games. After securing his first at the games in Athens in 2004 he then helped his country to further success in Beijing in 2008, where he played with Lionel Messi. The two Blaugrana players also appeared together for Argentina at the World Cup Finals in South Africa 2010.

Javier Mascherano (June 8, 1984) has authority and presence in the centre of the pitch. The captain of Argentina is a natural leader and is superb when tracking back to win tackles and protect his defence.

Circumstances and a series of injuries meant that his role increased as the season went on. He started playing in midfield, competing for a place with Busquets, but ended the season showing his virtues as a central defender (as Puyol, Milito and Abidal were all out for some time). It was as a centre back that Mascherano played at Wembley, where he won the Champions League for the first time.

He sweeps up across the middle of the field and lays the ball off for team-mates to create forward movement. He is technically gifted and has a good shot from distance as well as an aptitude for tactics and discipline. His natural awareness and positional sense also make him a fearsome player.