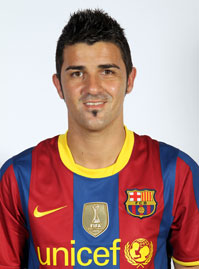 David Villa, 28, moved to FC Barcelona on 21st May 2010, just five days after the team won the second consecutive league title of the Guardiola era.

David Villa Sanchez made his first division debut with Zaragoza but really made his name with Valencia. However, his roots are in the mining region of Asturias in northern Spain where his father was a miner. He joined the youth teams of local club Sporting Gijon and soon made his way up the ranks to the first team.

He’s the 11th Asturias –born player to defend the Barca colours – previous famous compatriots in recent years being Quini, in the 80’s and former Barca captain Luis Enrique. Both of them recommended Barca to Villa.

David Villa’s career has been characterized by his unerring ability to score plenty of goals. In his seven seasons in the first division before joining Barca he never scored less than 15 a season.

Despite his individual talent, he has collected relatively little silverware – two Cup medals and a Spanish Super Cup. So he joins Barca with plenty of hunger for honours.

His honours were dramatically extended after just one year at Barça. In 2010/11, playing on the left side of attack under Josep Guardiola, Villa won the Spanish Supercup, the league and the Champions League. He ended the season with a cracking goal in the Wembley final against Manchester United.

Villa is also a key part of the international team and, after the South African World Cup, has scored more World Cup goals than any other Spanish players. He played a huge role in Spain’s victory. His five goals made him Spain’s top scorer and – together with Müller (Germany), Snejder (Holland) and Forlán (Uruguay) – also the tournament’s top scorer.

He’s not especially big for a striker (1.75 m and 69 kg). His main virtue is his ability to shoot with both feet. As a child, he had a medical problem with his right leg so he focussed on his left, eventually becoming two-footed. In addition he’s an excellent header of the ball – an authentic goal machine.

Apart from his shooting ability, ‘El Guaje’ (The Lad) as he is affectionately known, is amazingly fast and mobile – a player who looks for the pass into space. Unpredictable. Off the ball, he works hard for the team and applies constant pressure to the opposing defence. He’s a charismatic player, a winner, who can turn a game at any moment.