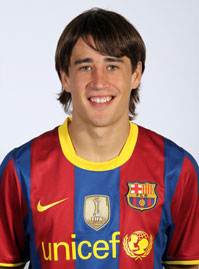 Bojan Krkic joins the senior squad for the 2006-07 season at the tender age of 16. In just one year he has progressed from the youth side to Barça B and now the first team.

Bojan Krkic was born in Linyola (Catalonia) on 28th August 1990. In just one season, from 2006-07 to 2007-08, this promising young forward has made the leap from Juvenil A to the first team. Along the way he played the second part of the season with Barça B in Second Division B.

During his half season with Barça B, he scored 10 goals and became the team’s top scorer.

He really arrived on the scene in 2007. He played in the European Under-17 Championship with Spain, both winning the tournament and scoring the winner against England in the final (1-0); he made his debut with Barça’s first team in a friendly played in Egypt, scoring once; and finally he made his debut with Spain’s Under-21 side at the age of just 16. A year to remember to be sure.

Bojan began the 2007/08 preseason with the first team. However, he couldn’t go on the club’s Asia tour as he was called up for the World Under-17 Cup in South Korea, where he notched 5 goals and Spain finished as runners-up.

Thus the 2007/08 season consolidated Bojan as one of the finest strikers in the League, in which he scored 10 goals and was in the starting line-up 14 times.

In the 2008/09 season, Bojan scored two League goals, but contributed more to the 25th cup title in club history. Guardiola used him in both the cup and league as a player that could come on as sub and change the course of matches.

He consolidated his position as a fundamental member of the first team in the 2009-10 season. His goals in the final stages of the season were vital in clinching the league title. In 2010/11, despite getting fewer goal than ever, seven, Bojan played in more games than the previous campaign and was one of Guardiola’s resources for changing a game.

Bojan is fast and has the ability to go past his marker. Despite his youth, he is used to dealing with defenders that are stronger and more experienced than him. His bursts of speed and his skill with the ball at his feet are two of his virtues. However, his main strength is his killer instinct in front of goal.