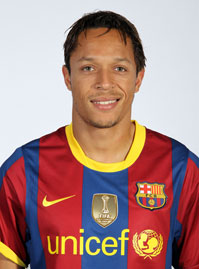 Adriano joined Barca on July 17th 2010 at the age of 25, after playing for six seasons at Seville. The Brazilian is Barca’s second summer signing of 2010 following the capture of David Villa in June.

Adriano Correia Claro (26 October1984, Curitiba) signed a four year contract, with the option of a further season and a 90 million Euro buy out clause, on July 17th 2010. After playing futsal as a youngster he was signed by Seville from Brazilian outfit Coritiba, where he debuted at the age of 18, and played for the Andaluz club for six seasons from 2004 to 2010.

The Brazilian won an impressive number of medals with Seville, picking up at least one title in four of his six seasons at the club. The last one being the Spanish Cup won at the Nou Camp at the end of the 2010 season against Atletico Madrid. He played a total of 157 games for Seville and scored 11 league goals.

In his first season at Barça, Adriano made 31 appearances and was the first choice on the left until injury kept him sidelined for the remainder of the season.

Adriano was also a part of the 2003 Brazilian under 20 World Cup winning team and won the Copa America with the full national side in 2004.

One of Adriano’s great strengths is his ability to play in a variety of positions. His skill and forward running are always to the fore when he plays at either left or right back and his attacking instincts and hard work also mean he can easily fill a number of roles in midfield.