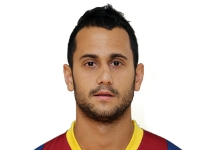 Considered to be one of the best attacking players in the youth ranks Víctor Vázquez has continued to prove that he will become a star at the highest level. As well as possessing a fine shot from distance his ability to play just behind the main striker, up front on his own or down the left flank has meant that he is a very useful player to have in the squad. He is a leader off the pitch and someone that the younger players look up to.