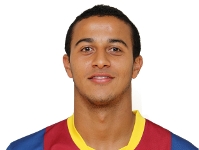 He has already shown that he can play at the highest level as he scored for the first team on February 10, 2010 in a 4-0 against Racing Santander. Pep Guardiola rates him highly and so does Luis Enrique with both coaches looking set to make use of his undoubted talent in the future. He possesses a unique and innate talent as his vision and ability to create space make him stand out in the midfield. Thiago is not asked to track back and instead is key to building once his side have the ball and that is where he shines.