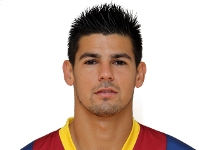 Before joining Barēa he played in a slightly more central role and that has served him well as he has drawn on that experience when playing up front. The Andalucian starlet has adapted to playing on the left flank and that is where he has shown his ability to dribble, cross and score goals. A key member of the squad as the B team won promotion to La Segunda A.