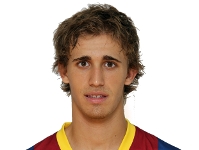 The Lloret de Mar-born defender can play on the left or in the middle and has already impressed enough to perform at the highest level. Muniesa made his first-team debut two seasons ago against Osasuna, but his display will be remembered for a harsh red card that he was shown. The fact that did not affect him highlights his strong character and that, allied with his ability in possession, has made him one to watch.