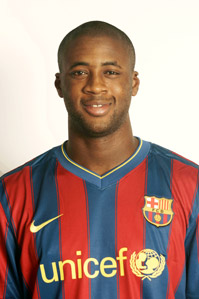 Tourť Yaya is the first player from the Ivory Coast to play for FC Barcelona and has brought with him immense international experience, having played in four different leagues across Europe during his career.

Tourť Yaya (Sokoura Baouke, 13-05-1983) had a remarkable route to Camp Nou, picking up experience in all kinds of places before coming to the Camp Nou.

Tourť Yaya started as a professional aged 17 at ASEC Mimosas Abidjan, the capital of his home country, where he won the League. Belgium has traditionally been a country that has imported young Africans, and in 2001 he signbed for first division Beveren.

After two and a half years in Beveren, where he played 70 games and scored three goals, in the winter transfer window of 2003/04 he left for Metalursk Donetsk in the Ukraine, where in the first half season he appeared in 11 games and got one goals, and in his second he played 26 games, including some in the UEFA Cup, and scored three times.

From Donetsk he moved on to Greece to join Olympiakos. During his year in the Piraeus-based club he played alongside former Blaugrana stars, Rivaldo, Haruna Babangida and Dani GarcŪa as the team progressed in the Champions League. In Greece he won a League and a Cup and his great European performances attracted the attention of some big name clubs.

Surprisingly it was Monaco that snapped up the player in the summer of 2006. His first manager in the Principality, Lazlo Boloni, made little use of him, but all that changed under Laurent Banide, who took over in October. Monaco climbed from 19th to 9th in the table, and the Ivorian played as an attacking midfielder, scoring five goals and supplying five assists in his 27 league outings.

Tourť had little time to establish himself at Monaco, because by the end of the season he was signed by BarÁa. He was presented on June 26, 2007 and impressed from the start, although he was generally used in a more defensive role than the one he was used to.

Frank Rijkaard played him in 38 games in his first season (26 in the league, three in the cup and nine in the Champions League), and he scored two goals.

Pep Guardiola made even more use of the Ivorian, and even played him at centre back when needed. He played 43 games in the treble winning season (25 in the League, six in the Cup and 12 in the Champions League). He scored three goals, including an unforgettably spectacular equaliser in the cup final against Athletic Club Bilbao.

At international level, the 24-year-old is a regular in the Ivory Coast side and represented the Elephants in their first ever appearance in the World Cup Finals last summer in Germany, where he was one his country’s stars along with Didier Drogba. He also appeared in the African Cup of Nations in the same year.

Tourť Yaya is the first player from the Ivory Coast to play for BarÁa and is renowned for combining his strength and physical power in front of the back four with great technique. He is usually employed as a defensive midfielder and is capable of pushing forward to support the attack if required, as well as being adept at passing the ball at speed to keep moves flowing. He has also responded well called upon to fill at centre back, which has happened on numerous occasions.