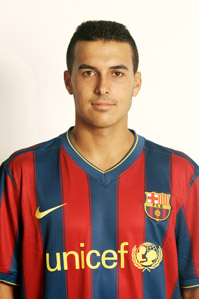 On August 20, 2009 Pedro signed a contract as a first team player after being one of the highest scorers in the preseason matches. In 2009, Pedro Rodríguez scored in the Spanish League and Cup, the Champions League , both the European and Spanish Super Cups and the World Club Cup – the first player in the world to achieve this.