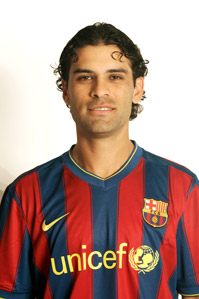 When he arrived in the 2003-2004 close season as one of the principal reinforcements in defence, Rafael Mįrquez was the first Mexican ever to play for Barēa.

His youth and progress confirmed him as one of the most promising defenders in Europe, as he had demonstrated in his four seasons with Monaco and the three he played in Mexico.

Rafael Mįrquez was born on 13th February 1979 in Zamora Hidalgo, in the Mexican state of Michoacįn de Ocampo. At the age of 14, he went for a trial with the Atlas de Guadalajara youth teams and was one of only two boys chosen out of one hundred. He made his debut in the Mexican First Division when he was just 17 years old and quickly cemented his place in the starting eleven.

After just 15 matches in the First Division, Mįrquez earned a call-up to the Mexico squad managed by Bora Milutinovic, to play in the Aztec Stadium in Mexico City against Ecuador on 5th February 1997.

In 1999, at 20 years old, he led Atlas to the final of the Mexican Summer Tournament, where they lost on penalties against Toluca. A few months later he was included in the national squad for the Copa America match against Paraguay. Mexico finally finished third.

After the Copa America, and before moving to Europe, Mįrquez earned his first silverware when Mexico won the Confederations Cup against Brazil.

Despite being only 20 years old when he joined Monaco, Mįrquez was one of the leading players in the Monaco squad and in his first year won the league and the Super Cup (in 2000) and was named as best defender in the French league. He consolidated his reputation as one of the most promising defenders in world football thanks to his class and excellent positioning. Only injury prevented him from playing more regularly. In his last season with Monaco (2002-03) he won the League Cup.

He was on the wish list of many of Europe’s top clubs and finally moved to Barēa in the summer of 2003. He gradually won the confidence of Barēa coach Frank Rijkaard until becoming a regular in the starting line-up, injury permitting. He made his competitive debut on 3rd September 2003 in matchday 2 against Sevilla in the Camp Nou. In his first season he was a key member of the team that secured a direct place in the Champions League.

In 2004-05, he demonstrated his versatility. The knee ligament injuries to Edmilson and Thiago Motta meant that Mįrquez was asked to step away from his usual role in the centre of defence and play as a defensive midfielder, as he had done for both Monaco and Mexico in the past. He proved to be outstanding in front of the defence as he helped the side win the league title.

Once again, injuries limited the Mexican’s contribution in the 2006/07 and 07/08 seasons. In total he played in 21 and 22 League games respectively. With the arrival of Touré Yaya, Mįrquez once again moved back into the centre of the defence where he formed a fine pairing with Gaby Milito.

In the 2008/09 season, Rafa avoided injury until was injured in April against Chelsea and subsequently missed the Cup and Champions League finals. He recovered the brilliance of his early years with Barēa and played 37 games and scored in every competition, despite playing at centre back.

Right footed and very skilful, he anticipates his opponents well. In addition, he is accurate in long passing, a great free kick taker and strong in the air thanks to his height.

In Mexico, he is known as the "Kaiser of Michoacįn" for his elegance on the ball, dependability and skill coming out of defence with the ball at his feet, characteristics similar to those of Franz Beckenbauer.

Although his usual position is at centre back, he has the quality to play in central midfield. In this more attacking position, Mįrquez can impose his strength in the air as well as build the play from the back and break up opposition attacks.

He doesn’t hesitate to commit himself in defence and knows how to use his physical strength to dominate opposing forwards.