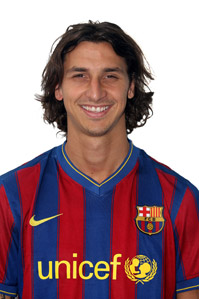 ‘Ibra’ joins Barça in the summer of 2009 from Inter Milan to replace the man who had worn the number 9 shirt for the previous five seasons, Samuel Eto’o, who moves in the other direction to Inter Milan.

Zlatan Ibrahimovic was born in Malmö (Sweden) of a Bosnian father and a Croatian mother on 3rd October 1981. He joins Barça at the height of his career and is recognized as one of the most lethal strikers in European football. He is one of that rare breed of total footballers: he’s deadly in the air, fast, effective in front of goal and mesmerizing with the ball at his feet. His style of football makes his team-mates play better.

Ibrahimovic started his career with Malmö before moving on to Ajax in 2001, where he joined up with Barça team-mate Maxwell. Here he started to get noticed on a bigger footballing stage and gave indications of becoming a world class star despite his youth. For part of his time at Ajax his manager was former Barça star Ronald Koeman.

After three seasons in Holland, where he won two league titles, the Cup and two Dutch Super Cups, Ibrahimovic signed to Italian giants Juventus, managed by Fabio Capello, staying there for two seasons from 2004 to 2006. Juve finished top of the league in both seasons but were stripped of the title and relegated to the second division as a result of the “Moggigate” scandal, leading to his transfer to Inter Milan.

Ibrahimovic won three league titles and two Italian Super Cups with Inter Milan and was an essential part of the starting line-up under both Mancini and Mourinho.

Ibrahimovic is also a key member of the Sweden international team and has been voted his country’s best player on three occasions (2005, 2007and 2008).

Ibrahimovic has always stood out as a skilful player, scoring some amazing goals and displaying tremendous creativity. That’s why he’s known in Italy as ‘Ibracadabra’.

He stands 1.92 metres tall and combines great technique with a powerful physique, making him particularly feared by defenders in the air, as well as making it difficult to take the ball away from him.

In short, the Swedish international is the perfect modern centre forward and goal scorer. Last season he scored 25 goals in the Italian league with Inter Milan.