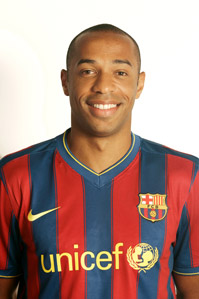 Thierry Henry is considered to be one of the best forwards in world football over the past decade. Elegance, ability and effectiveness are his main assets.

Born in Les Ulis (France) on August 17, 1977, Henry grew up in a poor immigrant district on the outskirts of Paris (his father is from Guadalupe and his mother from Martinique, two overseas French territories). He started playing football locally at the age of six, later moving on to US Palaiseau at the age of 12 and finally Viry-Chatillon, aged 13. He was already catching outside attention, especially when he scored all six of his team’s goals in a 6-0 win.

There were Monaco talent spotters at that game, and then manager Arsčne Wegner introduced Henry to the French Federation’s famous Clairefontaine Academy.

He was 13 years old at the time, and there he met fellow future internationals like Trezeguet, Anelka, Gallas and Rothen. After a year in the academy, Henry spent as season at Versailles before signing definitively for Monaco in 1993. Arsčne Wegner, aware of the player’s talents, did not take long to hand him his debut in Ligue 1, shortly after his 17th birthday. In his first season, Henry played 8 games and scored 3 goals. In 1995/96, he scored three goals in 18 games, and gained his first European experience.

In 1996, Henry really started making the grade. First in the European Under 18 Championship where his goal beat Spain 1-0 in the final. Moths later his was named Best Young Talent in French Football. He also won his first major honour as Monaco won Ligue 1 in 1996/97, he himself playing 36 games and scoring nine goals. In the UEFA Cup, his reached the semi finals, Henry playing 9 games, scoring once and supplying four assists.

Several European clubs started showing an interest in the player, and in the 1997/98 season, he played 30 games and scored 4 goals in the League and 9 played 9 games and scored 7 goals in Europe, Monaco reaching the Champions League semi finals. In October 1997 he made his international debut in a friendly with South Africa. He was good enough to be included in the France team that won the World Cup in 1998, and he was his country’s highest scorer with three goals.

He only played half of the next season for his club. In the 1998/99 transfer window, Henry left Monaco for Juventus, having played 141 games, scored 28 goals and supplied 37 assists in the Principality.

But Henry struggled to adept to calcio and Turin, and after just 20 games and three goals he returned his old friend Arsčne Wenger, now manager of Arsenal in London.

In the English capital, Henry really became a global superstar. His speed and physique, coupled with exquisite skills fitted in perfectly with the Arsenal way, where Henry became the star striker in a team that gained worldwide recognition for its style of football and excellent results.

At Arsenal, the Frenchman broke almost every record in the book. He is the highest goalscorer ever for the club with 226 goals, and also holds the record for the new-look Premier League with 174. Thierry Henry was top scorer in the Premier League four times (2002, 2004, 2005 and 2006), a competition his side won in 2002 and 2004, as well as three FA Cups. His goals at Arsenal were enough to win him the Golden Boot for being the highest goalscorer in Europe in 2004 and 2005.

There was just one major title Henry missed out on as a ‘gunner’: the Champions League, which he lost the final of in 2006 against Paris against Barça. Now a living legend at Arsenal, in 2007 he decided he needed a fresh challenge, and signed for Barça.

In his first season in Catalonia, he was the club’s top scorer with 19 goals in all three major competitions. He made 30 league appearances under Frank Rijkaard, usually playing in a less familiar position out wide on the left of attsck.

In 2008/09 Josep Guardiola became the new manager. He wanted experience in the side and made Henry a regular component of the treble winning squad. Still playing in a more left-sided role, he scored 26 goals in 42 games. In Rome, and in the Champions League final, he finally managed to win the one major club title he still did not have in his honours list.

Speed and technique are two of Henry's main characteristics, which he allies with efficiency and elegance. He is considered to be one of the most skilful players in the game with the ball at his feet as well as being an extremely intelligent footballer.

Despite having been moulded into a central striker under Arsčne Wenger, Henry can play across the front line, thanks to his sublime pace. He is a free kick specialist, generally taking them with the top of his foot to add his trademark swerve that goalkeepers find so hard to deal with.