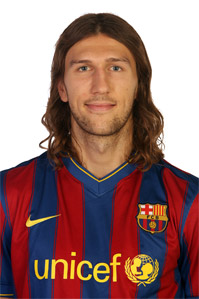 Dmytro Chygrynskiy is the first ever Ukrainian to play for Barça. The young centre half guarantees an aerial presence and strong defensive skills but is also good with the ball at his feet.

Born on 7th November 1986 in Iziaslav (Ukraine) Chygrynskiy is a young centre half and was a key member of the Shakhtar side that made history last season by winning the UEFA Cup, the first international trophy in the club’s history.

He started playing football in the youth ranks of Karpati Lviv, a small team from Ukraine’s First Division. When he was 14 he was spotted and recruited by scouts from Shakhtar.

Chygrynskiy made his Shakhtar debut in the 2003/04 season at the age of just 17, playing one league match. He already stood out for his good positioning sense and his ability to play the ball out of defence. Curiously enough, he made his European debut on 7th December 2004 against Barça, a match the Ukrainians won 2-0. However, he played just a few minutes in injury time.

Despite his youth, he was already a regular in the Ukraine under-21s, helping them to qualify for the final stage of the European Cup.

In the 2005/06 season Chygrynskiy went out on loan to PFK Metalurg Zaporizhia in order to get more experience, playing 15 matches and doing enough to convince the Shakhtar coaching staff to reincorporate him. He impressed with his determination, pace and ball skills.

He returned to Shakhtar before the winter break and went on to play 11 matches (3 goals) in the second half of the season, in the process winning the league title, his first trophy.

At the end of the season Chygrynskiy played in the under-21s European Cup, leading Ukraine to the final where they were beaten by Holland. He was voted into the team of the tournament.

National team manager Oleg Blokhin named him in the senior squad for the 2006 World Cup however, injury problems that he had suffered with the under-21s kept him on the bench throughout the five matches played by the Ukraine.

At the age of 20, in the 2006/07 season, Chygrynskiy captained Shakhtar to a second place finish in the league and to the Cup final, which they lost 2-1 against Dynamo Kiev. The following season he led the team to a league and Cup double and was voted best player in the Cup final. By now he was a fixture in the national team. Last season he made history by captaining Shakhtar to the UEFA Cup.

Chygrynskiy is a powerful defender with great prowess in teh air as he uses his 1.90cm frame to good effect at set pieces and when defending high balls. His speed is also a huge asset as he makes up ground on opposition forwards very quickly and that allied with his positional sense makes him a highly-respected centre-back. Since he was very young, the Ukrainian international has been tipped for the big time and his dedication and professionalism has always shone through and earned him plaudits.