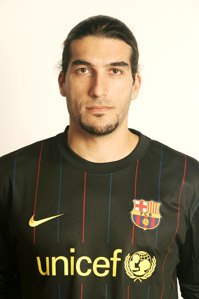 Josť Manuel Pinto joined BarÁa on 18 January 2008 from Celta, the club he had played for during the previous ten seasons. He came on loan but FC Barcelona signed him permanently at the end of the 2007/08 season.

Born in Puerto de Santa Maria (CŠdiz) on November 8, 1975, Pinto start his professional career in Andalucia. After spending three seasons with Real Betis's B side, he moved up to the first team and made his debut for the club during the 1997/98 campaign. A year later he agreed to move to Celta Vigo, where would spend the next decade before leaving to go to Camp Nou.

That year, Pinto conceded just 28 goals in 37 league matches (an average of 0.75 per game) and helped guide the team to sixth place in the top flight and into the UEFA Cup. The season before had seen VŪctor Valdťs win the Zamora.

In the 2008/09 season, Guardiola made Pinto his first choice stopper in the cup. The Andalusian played every game in the competition and performed especially well in the semi final, saving a penalty from Mallorca’s MartŪ, which could have complicated Barcelona’s qualification. He also played the last games of the league campaign, thus ensuring Valdťs won the Zamora Trophy.