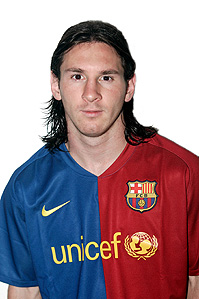 Messi also regularly plays for Argentina, appearing at the World Cup in 2006 and the Copa Amčrica in 2007. In the latter competition Argentina reached the final only to lose to Brazil.

Messi is an unusual player. He is highly creative, and has the skills to take on defenders with ease. He is a versatile left-footed player who can play either in the middle or on either wing, or even as a centre forward.

Although he is quite short, he is so fast and physically strong that he can cope with larger opponents. He is incredibly powerful, and a specialist in such dead ball situations as corners, free kicks and penalties.

Leo Messi is cool-headed and able to assume several responsibilities in times of need. He is a player who is destined to have a very successful career in football.