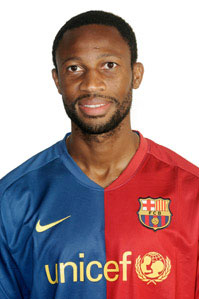 Seydou Keita became FC Barcelona’s first signing of the 2007/2008 season. The Mali player arrived from Seville to strengthen the azulgrana centre of midfield.

Born in Bamako (Mali) in 1980, Seydou Keita began to make a name for himself in European football in the French league. He signed for Olympic Marseilles in 1999/2000 but only stayed for one year without having had much luck. He moved to Lorient where he spent two seasons and the French Cup. Then it was on to Lens where he played for five seasons between 2003/04 and 2006/07. His final season was spectacular and he scored eleven goals in 37 league games and was named Ligue 1’s second best player behind Florent Malouda.

After eight years in France, Keita signed for Seville in the summer of 2007 and was almost an ever-present during the 2007/08 season. He played in 31 of a possible 38 games, starting 29 of them. He scored four goals and these showed that, amongst other qualities, he packs a powerful shot from distance.

Seydou Keita has been a full international for Mali since 2004. With ‘the Eagles’ he played in the 2008 African Cup of Nations but Mali was eliminated in the first round.

However, his career with his national side began at a young age and with good results. In fact, Keita won the balon d’or as best player in the U-20 World Cup in Nigeria in 1999. Mali finished third in the competition, which was won by a Spain side that included Xavi Hernández.

The Mali midfielder is a player who perfectly combines physical strength with technical ability and tactical awareness. Despite not being a forward, Keita also possesses a great shot with his left foot, especially from distance, which makes him a real threat to goalkeepers; the fifteen goals he scored in the two years before joining Barça are testament to that. The Malian has a lot to offer in midfield: he can play in a holding role as well as behind the attackers and can also play on the left.