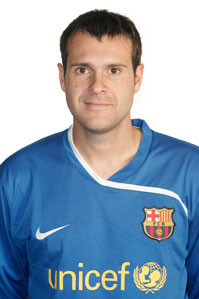 He made the leap to the first team in the 2003-04 season as third choice goalkeeper behind Víctor Valdés and new signing Rüstü Recber, making a spectacular first team debut against Athletic Club Bilbao in the Nou Camp on 17th January 2004, where he put in a top performance. He then played four weeks later, also at home, this time to Atletico Madrid and was one of the stars in Barça's 3-1 win.

In the 2004-05 season, Jorquera had the chance to show his qualities in the last two games of the season, with Valdés being rested after securing the Zamora title for ending the season with the best goalkeeping record. The man from Bescanó has always performed well when called upon and has never complained about spending so much time on the bench.

Jorquera didn’t play as much in the 2006/07 and 2007/08 seasons. In the former he didn’t play in the League at all, though he did turn out in all the King’s Cup games (the team reached the semi-finals). The latter was marked by a serious ligament injury to his right knee sustained in the game between the Basque Country and Catalonia on 29 December 2007 which forced him to sit out the rest of the season. FC Barcelona signed José Manuel Pinto to stand in for him.

Jorquera has made excellent progress since joining the Barca academy. Thanks to his hard work and determination, he has developed great reflexes, anticipation and agility.

He stands out for his positive attitude and cheerful character. He's sober and the complete keeper. Consistency is one of his main defining characteristics.