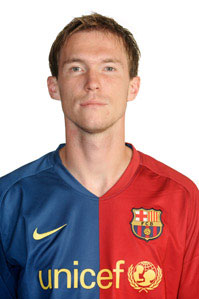 Alexander Hleb, the first Belarusian in club history has arrived at FC Barcelona as the fifth new signing of the summer of 2008, after demonstrating his qualities with both Stuttgart and Arsenal.

Alexander Hleb started out at FC Bate Borisov but at the tender age of 19, in the 2000/01 season he was off to the Bundesliga. It was there he started making himself known on the European stage with five seasons at Stuttgart from 2000/01 to 2004/05.

The Belarusian made an even bigger step forward in 2005 when he was picked up by London side Arsenal. He soon became a regular part of manager Arsčne Wenger’s plans, as the Gunners qualified for a Champions League final losing to FC Barcelona in Paris), and it was there he spent two seasons alongside Thierry Henry, who he rejoins at FC Barcelona.

Renowned for being ambidextrous, Hleb is a player who creates plenty of tactical options due to his versatility and polyvalence. He is a midfielder but likes to help out in attack and makes dangerous penetrating runs through the middle.

He is used to pressure, is both athletic and quick, and able to play on either of the two wings, playing wide or more centrally, and is a frequent presence in the creation zone. He reads the game well and is an artful passer of the ball.