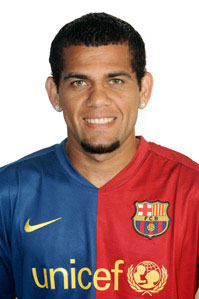 Dani Alves is one of the strongest, most intense and athletic right sided players in the world. He arrived at FC Barcelona in the summer of 2008, aged 25 and after six seasons with Sevilla.

He was born on May 6, 1983 (Juazeiro, Brazil). Daniel Alves joined the Andalusian club in 2002 (signed from Bahía of Brazil), but it was in 2003/04 that he really came into his own. Alves played 29 games as he became the club’s first choice right back and helped his side to qualify for Europe.

Over time, Alves became one of the lynchpins of the Sevilla defence, but also contributed to the attack, and in 2005/06 won the UEFA Cup. He was named by UEFA as the player of the tournament in the 2005/06 season, and a few months later featured in the Sevilla side that beat FC Barcelona in Monaco to win the European Super Cup.

In the 2006/07 season, the Brazilian was once again a central part of the Sevilla team, and as well as the Spanish Super Cup, his side retained the UEFA Cup in Glasgow and also collected the Copa del Rey.

The year before signing for Barça the Brazilian won the Spanish Super Cup against Real Madrid and made his Champions League debut, with Sevilla surviving the group stages before going out to Turkish outfit Fenerbahçe. In the 2007/08 season, Alves played 33 league games, with only Navas making more appearances.

Alves has also made his mark on the Brazilian national side. In the summer of 2007 he played a major role in the Copa America winning team.

He may be 173 cm tall and weighs 64 kg but Alves is a physical presence on the pitch, and is able to bite anywhere on the pitch. He rarely tires, and like the typical Brazilian full back, patrols the whole right side of the pitch, participating as much in defence as attack. He has scored eight league goals for Sevilla during these trademark advances up the pitch, which have come as much with his left foot as with his right, and he is also lethal from dead ball situations.