Three years after Paris, Barça have once again won a major trophy. They came from behind to beat Athletic 4-1 and in doing so, gave a lesson in creative football. Total football is back!

On Wednesday night, Mestalla witnessed FC Barcelona win the first trophy in a potential treble. The first is in the bag, the second is almost won, and the third will be decided in Rome. Nobody said it would be easy, but despite the missing players and the tiredness, Guardiola’s side has stayed faithful to their philosophy, and if they play like this on the night of May 27, then Manchester United will have a very difficult job indeed.

Guardiola off the mark

At Mestalla, Barça produced their enviably competitive spirit to eventually win the game comfortably despite conceding an early 9th minute goal. They reacted by sweeping aside Athletic Bilbao to the tune of four goals and in doing so, provided Pep Guardiola with the first trophy of his managerial career. It was a victory for good football.

It was always going to be a fascinating encounter, between the two teams that have won this title the most times. Yet it was also a clash of styles, and two very different ideas of what football is about. Barça’s combination passing game against Athletic Club’s high balls and physical approach. The first half produced what most pundits had expected.

As early as the 9th minute, Athletic were awarded their first corner following an excellent Pinto save. Yeste sent the ball over to the far post, where Toquero was waiting to beat both Keita and Xavi in the air and head the ball straight into the back of the net. In imitation of Endika’s exploits 25 years previously, the Basques were into an early lead against their Catalan opposition. At this stage of the game, the red and whites were not only a goal to the better, but also seemed to be enjoying the lion’s share of the play.

Barça were struggling to bring the ball out of defence, with the Basques applying constant pressure to the centre and full backs. But following a disorientated first quarter of an hour, Xavi in particular starting guiding matters back in the right direction. With deft through balls to Eto'o and Bojan, gaps started appearing in the Bilbao defence. In fact, Eto'o could easily have tied the match in the 20th minute following an excellent assist from Xavi, but the Cameroonian dallied just that little bit too long to get a decent shot in.

Barça’s pressure was causing more and more concern to Athletic, whose lines were pushed further and further back. Barça were evidently more composed, and got their reward on the half hour. The unexpected protagonist was Touré, playing today at centre back. In an individual move displaying both skill and strength the Ivorian advanced from midfield and slalomed around three defenders before sending a low, powerful drive straight into the bottom right hand corner of the goal, just beyond the reach of Bilbao stopper Gorka.

The two goals were a reflection of the respective styles of the two teams, Bilbao scoring from a corner and showing their superiority in the air, while Barça’s was a display of sheer skill and flair. The sides went in at the break in very different moods. Barça’s goal had knocked the wind out of the Basques, while Barça could even have gone in as leaders if Alves’ well-taken long range free kick had hit the target.

The game restarted with Barcelona absolutely dominating almost every aspect of the game. This was made clear by the way Messi enjoyed three consecutive chances. Surely there was a goal on the way. And there was, in the 52nd minute, and it had to be Leo Messi who scored it. The Argentinian latched onto a rebound in the area and directed the ball past Gorka to put his side into a well-deserved lead.

Barça had been offering almost all the good football, and as they have always done this season, rather than sit back on their lead, they went straight out in pursuit of more against a team that was losing confidence as every minute went by.

The third goal was a clear reflection of the way the game was going. Alves regained possession in his own area, played it out to Messi, and the Argentinian flew off on a counter attack. Messi played it through to Bojan, who finished the move off in spectacular style. It had looked like a pass to Eto'o would have been the most simple option, but the young striker from Linyola did what was expected of him and sent ball narrowly below the opposing crossbar.

It was all too much for Caparrós’ side to take, and yet there was more of the same to come. Barça produced their fourth from a dead ball situation – a free kick on the edge of the area that Xavi converted in magnificent fashion. Once again with a shot that squeaked in just inches from the post - Gorka could do nothing to prevent Barça taking a 4-1 lead.

There were still 25 minutes to play, but with the result already way out of doubt, it was essentially just a matter of running down the clock before the celebrations could begin. It was a scintillating, ambitious display of perfect football from a Barça team that after three dry years, finally has a major title to celebrate. 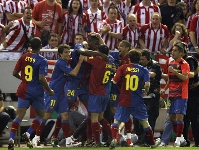