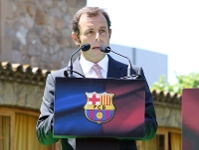 Sandro Rosell assumed the role of president of the club on July 1, 2010, after enjoying an overwhelming victory in the elections on June 13, where he secured 61.35 per cent of a record turn-out of 57,088 voters.

Having been linked with sport for many years Rosell takes over at the helm of FC Barcelona from Joan Laporta with an extensive knowledge of how the club operates and of the world of football. A graduate in company administration he gained an MBA at ESADE and has worked in sport marketing and football. Rosell is a founding member of Bonus Sports Marketing company and has previously worked in Nike's Marketing Department ahead of the 1992 Olympic Games in Barcelona. He is the son of Jaume Rosell, who was general manager of Barça during the presidency of Agustí Montal.

Having been a club member since October 4, 1970, Rosell has always been linked with Barça and with football and was a ballboy in Camp Nou, like Pep Guardiola, when young. The new president played regularly for Penya Barcelonista de Collblanc and appeared for l'Hospitalet in the Spanish third tier, la Segunda B.

Rosell worked at Barça after being a member of Laporta's board of directors that won the election in 2003 under the slogan 'Primer el Barça' (Barça First) and was instrumental in bringing Ronaldinho to the club. He was also key in the social and sporting turnaround that the club enjoyed in his role as sporting vice president. On June 2, 2005 Rosell stepped down from his role after a difference of opinion with the board.

Five years later and Rosell led his own party in the presidential elections under the banner 'Tots som el Barça' (We are all Barça) after he had listened to fans and their desires for two years. He wants to bring about the dream of his father and drive the club on to further success both domestically and around the world.