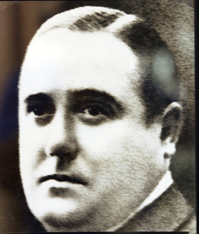 Ricard Graells took over from Joan Gamper when the founder of Barcelona Football Club stood down for the third time, on 10th June 1919.

His time as President was a complete success. The number of members of the club reached 3,217 and, in line with the aspirations of Catalan autonomy, of which Graells was a great promoter, Barcelona Football Club joined up with other organisations which celebrated the Catalan national day La Diada, celebrated on 11th September. Financially, the club was able to pay off a debt of 16,100 pesetas, which had been carried over from the previous presidency and consequently, for the first time in many years, the club owed nothing to anybody. On the pitch everything also went well, as Barça had got together a superb squad of players, which won both the Campeonat de Catalunya and the Spanish Championship.

At the end of the season, on 27th June 1920, there was a multitudinous general meeting of club members, during which the new Statutes of the club were discussed. An agreement was rapidly reached and the 43 articles, which the secretary Joan Bapista Soler had drawn up, were unanimously approved. As well as this, the monthly subscription paid by club members rose from two to three pesetas, and a committee was formed, made up of the majority of the former Presidents of the club, whose job it was to make an in-depth study of everything related to the proposed building of a new ground, which had started under Gaspar Rosés - the man to whom Graells handed over the presidency on 27th June 1920. Thus began Rosés's second period in charge at Barça.