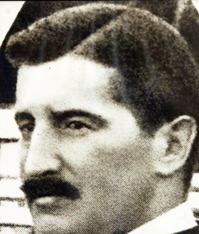 Otto Gmelin became president of Futbol Club Barcelona on October 14, 1909. He arrived after Joan Gamper’s first presidential term, in which he had saved the club from extinction.

Gmelin was president for just under a year, until November 17, 1910, when he handed the presidential baton back to the club founder. During the 344 days under Gmelin, known as ‘Gran Otto’ for his corpulent figure, the club was extremely active in what was a worthy continuation of the revitalisation of the club during Gamper’s first period in charge.

The team itself could not have done better: Barça won its first Spanish Championship, became champions of Catalonia without dropping a point, and also won the Pyrenees Cup. This was also the first time the club welcomed a visiting team from Britain, Cardiff Corinthians, who were soundly defeated (4-1).

Gmelin’s period in charge of the club coincided with the demise of amateurism in football, and also the gradual increase in what were known as ‘passive’ members, in other words, those who weren’t interested in actually playing the game, but just wanted to come and watch as spectators.

When he stood down from the post, Gmelin joined Spanish football’s first College of Referees and also stayed on as a member of the board presided by Gamper.