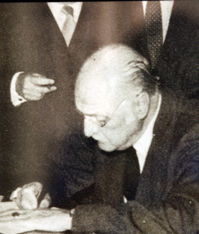 Josep Vidal Ribas was the President of Barcelona Football Club during the very brief gap that existed between the Marquis de la Mesa de Asta's two terms in office.

Following the Marquis's first resignation, he was chosen to head an interim committee which ran the Club from 10th July to 13th August 1942. Vidal-Ribas, a member of a distinguished Barcelona family, had previously been Vice-President of Barça, and later also held a position on the Board - this time as Secretary. The enforced return of Pińeyro meant that his presidency only lasted 33 days.