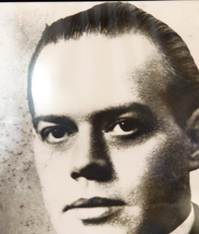 Josep Sunyol has gone down in Fútbol Club Barcelona history as the ‘martyr president’ as a result of his tragic death when he was in charge of the club in the early days of the Civil War and was shot by Franco’s troops in the summer of 1936.

Sunyol (Barcelona 1898- Serra del Guadarrama 1936), was a man of outstanding personality and was highly respected by all at FC Barcelona when he joined the board in 1928, curiously enough during the presidency of Arcadi Balaguer, a staunch monarchist and therefore a man of a very different political upbringing to his own. He was President of the Catalan Football Federation in the season 1929-30. In the years of the Republic, Sunyol was notorious both for his political activities, as the leader of left wing group Esquerra Republicana, and for his involvement in the sporting world. In the latter field, he was noteworthy as the creator and owner of the weekly magazine called 'La Rambla', which was distributed under the slogan “sport and citizenship”.

On July 27, 1935 he was elected president of Fútbol Club Barcelona. The members put their faith in him because he was the man they felt could sort out the club’s financial problems, a task that had already been started by his predecessor, Esteve Sala, who would now become treasurer, and who, along with accountant Francesc Xavier Casals, would help Sunyol to close the season at a considerable profit. On the pitch, the team won the Catalan Championship and reached that famous 1936 Cup Final, at which the then goalkeeper of Real Madrid, Zamora, won the title for his team with a memorable performance.

But Josep Sunyol’s brilliant career was cut short in tragic fashion on August 6, 1936, when as part of his political activities, the Barça president visited Republican troops near to Madrid. Without noticing, his car entered a zone controlled by Frano’s troops in Sierra de Guadarrama. Sunyol was identified and arrested, and without trial, he and his colleagues were shot dead on the spot. News of his death did not reach Barcelona until a week later, where it would cause a major commotion on all levels of society. As a posthumous tribute between the 16th of November and the 17th of January 1939 the Board of Directors decided to name Josep Sunyol FC Barcelona President in absentiaf.

The shooting of Josep Sunyol was the prelude for one of the most difficult periods the club has ever gone through.