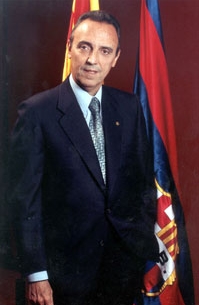 Joan Gaspart i Solves became president of FC Barcelona on July 23, 2000, following an election with an extraordinarily high turnout (45,888 votes were cast, almost half the members with a right to vote).

Before becoming club president, Joan Gaspart had been vice president for 22 years under Josep Lluís Núńez.

In his first year in charge, Joan Gaspart set about reforming the club regulations, which would have a major affect on the membership list. Before making these modifications, he consulted the members to find out their opinions about the most important issues affecting these reforms. He also promoted the creation of the Club’s ethical code and got plans under way for the construction of the Joan Gamper sports complex in Sant Joan Despí, for which the first stone was laid on December 11, 2000. It was also his presidency that set up the ‘Seient Lliure’ (Free Seat) and ‘Gent del Barça’ (Barça People) projects that would help extend and improve the services on offer to members.

But despite these achievements, sporting success was scarce, and in February 2003, Gaspart resigned as president without the football first team having won any official titles during his time in office. He was replaced by his vice president, Enric Reyna.