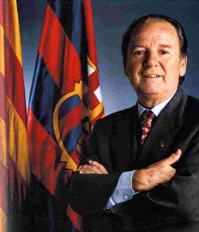 Candidates Ferran Ari±o and Nicolau Casaus with 9,537 and 6,202 votes respectively came short of the 10,352 votes that made Josep LluĒs N·±ez the 35th president in the history of F·tbol Club Barcelona. He came into office on July 1, 1978.
Unlike most of the presidents before him, Nu±ez had never been on the board of directors, but this well-known entrepreneur from the property sector had won through on the back of a campaign using the slogan ‘For a triumphant Barńa’, and he would go on to become the longest-serving president in the entire history of the club.

Josep LluĒs N·±ez’s first major task was to sort out the club’s financial problems, but he also had a bigger goal than that, none other than to make FC Barcelona the biggest football institution in the world. During his 22 years in power, Barńa would expand spectacularly. The Camp Nou was remodelled and the Miniestadi built next to it (1982) along with the Museum (1984) and a residency for youth players at La MasĒa.

With N·±ez in command, the football team won a host of titles both at home and abroad, while the three other professional sports teams (basketball, handball and roller hockey) were consolidated in a big way and went on to set new standards around Europe.

One year after Nu±ez took up the reigns, Barńa won the Cup Winners Cup in Basle, the first major title of his presidency. That final will always be remembered for the thousands of fans that journeyed to Switzerland to support the team. In 1982, with Udo Lattek as coach, Barńa won another Cup Winners Cup, beating Standard Liege in the final at the Camp Nou, which had just been expanded, as it was to be one of the main stadiums used at the forthcoming World Cup. F·tbol Club Barcelona topped 100,000 members for the first time and so much money was coming into the club that Nu±ez was able to sign a man who was considered the best player in the world at the time, Diego Armando Maradona.

The club kept on growing, and in 1984-85 N·±ez was able to celebrate his second league title as president, and won another period of office after winning the elections unopposed. Harder times were around the corner though, with defeat in the 1986 European Cup Final in Seville, a major disappointment that was the catalyst for the first crisis of the Nu±ez years, what was known as the ‘Hesperia Mutiny’ (1988) and that ended with almost the entire squad being dismissed.

This led to a whole new period in Josep LluĒs N·±ez’s presidency. The board signed Johan Cruyff, and the Dutch coach built up what would go on to be dubbed the Dream Team, delighting the whole of Europe with their spectacular play and finally winning Barńa’s first ever European Cup at Wembley in May 1992, along with an unprecedented four consecutive league championships and several other titles besides. This was undoubtedly his finest period in terms of sporting success, and he was re-elected to the presidency for the third time when he beat Sixte Cambra by 25,441 votes to 17,609 in 1989. In 1993 he would win a fourth term of office, this time unopposed.

After eight years, the relationship between coach and president had become strained, and Nu±ez decided to put an end to the Cruyff era and brought in Bobby Robson to fill in while he awaited the arrival of Louis van Gaal, the man he had singled out to take the club into the future. The year the veteran Englishman coached Barńa will always be remembered for the presence at the club of the brilliant Brazilian Ronaldo, whose amazing performances thrilled the crowds en route to the European Cup Winners Cup, Spanish Cup and Spanish Super Cup. That same 1997, N·±ez was re-elected for the final time after winning 76 per cent of the votes ahead of 24 per cent for his rival, └ngel Fernßndez. A few months after, the president had to overcome a motion of censure presented by the opposition group called El Elefant Blau.

Meanwhile, Louis van Gaal was putting together a team that would win two Leagues and one Cup in his first two seasons. But his trophy-less third season and patent inability to win over the affection of the fans brought Van Gaal’s first period as Barńa coach to an untimely end. Support for Nu±ez was waning too, which was more than evident in the club’s centenary year, and eventually led him to resign from the position and bring forward the elections, thus leaving the job after 22 years in charge of the club.

Naturally, as Nu±ez was in charge of the club for the longest period in club history, he also won more titles than any other president. In football alone, under Nu±ez the club won 7 League, 6 Spanish Cups, 5 Spanish Super Cups, 2 League Cups, 1 European Cups, 4 Cup Winners Cups, 2 European Super Cups and 3 Catalan Cups.