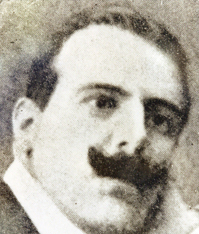 Gaspar Rosés presided over Barcelona Football Club on three separate occasions. He first took up the presidency on 25th June 1916, when he replaced Rafael Llopart on his resignation.

The most memorable aspect of his first presidency, which ended on 17th June 1917, is the so-called ‘Garchitorena Case'. Barça signed this player believing him to be Spanish, when in fact, he was Argentinian, as he had falsified his papers on arrival in our country. As a foreigner, he was therefore not eligible to play in the Campeonat de Catalunya, although in reality, he played the majority of the games. When the competition was coming to an end, Espanyol discovered this irregularity and reported it to the Catalan Football Association, which was presided over by the then President of Barça. This, however, did not prevent the Federation from deciding to deduct the points that Barcelona Football Club had won in all the games in which Garchitorena had played, and to make them repeat the matches. Barça refused and so, consequently, lost a championship that they had already won. This led to Rosés resigning from both his position as top man in the Catalan Federation and his position as President of Barcelona Football Club.

Three years later, on 27th June 1920, Gaspar Rosés was once again elected to run the Club. This, his second term in office, was happier because the team won the Campeonat de Catalunya. This success could not be repeated in the national championship because another act of high-handedness from the Federation led to Barça's withdrawal from the competition.

Off the field the most important thing achieved was the setting up of a working party, whose job it was to design a project for a new ground, as the stadium on Carrer Indústria had become too small. On 17th July 1921, Rosés gave up the presidency.

His last period in charge of the Club, which began on 30th June 1930, was marked by the death of the founder of Barcelona Football Club, Hans Gamper, on 13th October of the same year. It was also a period of constant disputes among the Directors, which can be seen by the fact that in a little over a year Rosés presided over three different Boards.

On the pitch the most positive thing was the winning of the Campeonat de Catalunya and the low point was being humiliated 12-1 in San Mamés. Finally, on 22nd October 1931, Rosés left the presidency of the club for the last time.