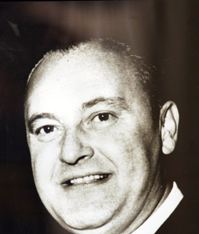 After Enric Martí resigned, given the gap in legislation, presidential elections were called by universal suffrage.

In a sporting sense, Barça won their first European titles, two Fairs Cups, while on the domestic scene, they won two Leagues and two Cups. The other major development under Miró-Sans was the completion of the Camp Nou stadium, which was inaugurated on September 24, 1957, a major leap forward for the club, which now had a wonderful new home that could meet the needs of its rapidly growing membership.

In 1958, Miró-Sans became the first Barça president to be re-elected, although these were very different to previous ones, as they were decided by drawing the names of 200 members by lots, and it was these who had to decide who would run the club. Francesc Miró-Sans easily defeated the other candidate Antoni Palés with 75 per cent of the votes. But some of his decisions led to disagreements at the club, which complicated his position to the point that it became unsustainable. So, on February 28, 1961, one year before his second term was due to end, Miró-Sans handed in his resignation.