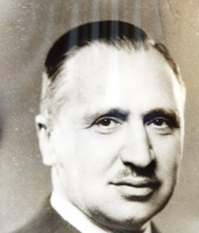 Esteve Sala became the twentieth President of Barcelona Football Club on 16th July 1934, with the principal aim of sorting out the critical situation which the Club was going through. As President he was faced with two main problems; one, financial and the other, sporting.

To solve the first the Board, led by Sala, standardised the monthly subscriptions paid by the members - which went up to 5 pesetas. To change the situation on the field, Platko was brought in as Manager and the squad was strengthened with two foreign signings: the Hungarian, Berkessy and the Uruguayan, Fernández, and two home grown players: Raich and Escolŕ. These measures led to a notable improvement in the performance of the team, who walked the Campeonat de Catalunya that season.

Sala, who was the first President of the club to include a woman - Anna Maria Martínez Sagi - on the Board of Directors, was the owner of the Orient Hotel. The most famous anecdote associated with him was that, due to the enormous admiration he felt for Samitier, he gave him a bedroom and offered to provide his keep for the rest of his life.

After a year of good management, which allowed the club to put the crisis firmly behind it, Esteve Sala decided not to run for re-election for personal reasons and consequently, on 27th July 1935, he handed the presidency to Josep Sunyol.