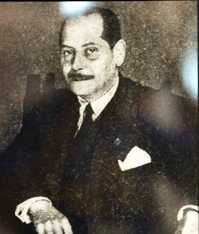 Enrique Pińeyro y de Queralt (Barcelona, 1883-1960), an aristocrat who was closely connected to the Franco regime, was named President of Barcelona Football Club by the authorities.

Pińeyro had had no prior dealings with the Club, but he had the great virtue of surrounding himself with a Board of Directors on which life-long pro-Barça men predominated. He quickly understood the feelings that Barça awakened in people, something which made him into a man who was devoted to Barcelona Football Club and who became its principal defender during a period which was extremely unfavourable to the interests of the Club. Under his presidency, Barcelona Football Club began to get over the trauma of the Civil War and finally, after a long period without seeing any silverware, Barça again won a trophy; the Copa del Generalisimo, in 1942. The downside of the season was how much they suffered to stay up in the First Division - the Blue-and-Reds were in the relegation playoffs against Murcia, which in the end they won easily enough (5-1). Just one week later, after having held the position for two years and four months, on 13th August 1942, Pińeyro handed in his resignation, saying that he had accomplished what he had set out to do. The Catalan Football Association accepted his decision, but the most important governmental bodies of the time voted against it and so, one month later, the Marquis de Asta had to take over the presidency once again for a second term, which lasted until 20th August 1943. After the shameful 11-1 hammering that Barça received in Chamartín, Pińeyro again resigned - this time definitively.

During his presidency, it is worth pointing out that the areas behind the goals and down the side of the Les Corts ground were increased in size and a basketball court was built. As well as this, baseball, cycling and handball were officially promoted.