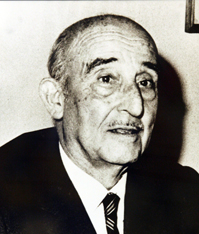 Enric Martí had been vice president under Agustí Montal and became his right hand man, and was therefore his logical successor.

When Martí became president on July 16, 1952, he inherited a triumphant club and his challenge was to keep the momentum flowing.

In the only season that Enric Martí was in command at Fútbol Club Barcelona, the team won the League, Cup and the Copa Eva Duarte, but that positive dynamic was broken by the controversy of the ‘Di Stefano case’, which led him to resign from the position.

Barça, who had already made an advance to River, the club that owned the rights to the Argentinian star, saw how Real Madrid came to an agreement with Millonarios Bogotá, where Di Stéfano was currently playing on loan. Although FIFA considered Barça to be in their legal rights and the Argentinian had already arrived at Fútbol Club Barcelona, the Spanish Federation, under pressure from state organisations and Real Madrid, stood in the way of the transfer and thus prevented Di Stéfano from ever making his official debut for FC Barcelona. The situation was prolonged for more than three months reaching the point of becoming unbearable, whereupon the National Delegation of Physical Education and Sport passed a judgement prohibiting clubs from signing foreign players, and so Fútbol Club Barcelona decided to sell the Argentinian on to Juventus.

But Real Madrid had not given up on Di Stéfano, and the Spanish authorities eventually came to decision akin to the judgement of Solomon. The Argentinian star would play for Real Madrid in the 1953-54 and 1955-56 seasons, and for Barça in 1954-55 and 1956-57. President Enric Martí signed the agreement, but was so widely criticised for doing so that he was forced to announce his resignation on September 22, 1953.

A few weeks later, Fútbol Club Barcelona decided to withdraw their claim to the player and so it was that Real Madrid signed Di Stéfano on a permanent basis.