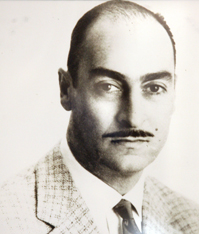 After Miró-Sans resigned, new elections for the presidency of Fútbol Club Barcelona were called in June 1961.

Two of the members of the previous board were in the running: Jaume Fuset and Enric Llaudet (Barcelona, 1916-2003), with the latter winning through. Llaudet based his manifesto on ten points, some of which were extremely interesting, though perhaps less innovative than those presented by his opponent. The more outstanding aspects of his candidacy included the creation of internal regulations, the calling of a referendum to decide on the future of Les Corts stadium, economic austerity, amateurism in the sections and the creation of a school-residence for young players.

The elections were held on June 7, 1961 and Llaudet defeated Fuset by an incredibly narrow margin of just 24 votes. The new president was going to have to deal with several difficulties in terms of both finances and sporting success. One of the measures he took was to solve the club’s financial troubles by requalifying the Les Corts site, which led to extensive negotiations with the Barcelona City Council. Finally, in the summer of 1962, the Council agreed to the club’s request and in 1966 the old ground was sold for 226 million, a figure that was enough to stabilise the FC Barcelona coffers.

It was precisely this operation that gave Llaudet the credibility he needed to comfortably get through the next election in 1965, at which he defeated Josep Maria Vendrell by 164 votes to 35. In the summer of 1966, the club was in an optimistic mood, and Llaudet created the Joan Gamper Trophy. But the 1966-67 season was a major failure in a sporting sense, and Llaudet was faced by heavy opposition that seriously questioned his management methods and put pressure on him to resign.

At the end of the season, the Barcelona president responded to the opposition by constituting a Consultant Council formed by representative members of the club, but this initiative did not produce the expected results. It was under those circumstances that Llaudet went into the Assembly of delegates in a highly precarious position indeed and he decided to bring the next election date forward to the following January, and did not stand for them himself. Before leaving the post, on January 17, 1968, Llaudet called for the creation of a single candidacy in order to avoid an election campaign that could prove damaging to the club. Narcís de Carreras was named as the man, and was elected president by acclamation.