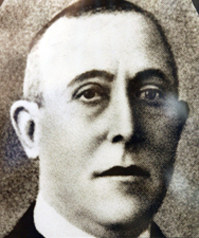 The fifteenth President in the history of Barcelona Football Club began his term on 29th July 1923, taking over from Joan Gamper, who was stepping down after his fourth period running the club.

A few months later, the dictatorship of Primo de Rivera began and Barça, which was an institution that favoured Catalan nationalism, became a persecuted Club. As a result of this, the Management called on the fans to behave correctly at all times.

Cardona's presidency was marked by the progress of the team. The season began well, with Barça becoming Champions of Catalonia ridiculously easily, winning all of the ten games they played. The superiority of the Blue-and-Reds unleashed a wave of euphoria amongst the members, although in the semi-final of the Spanish Championship Real Unión de Irún knocked Barça out after a 6-1 hammering. This defeat led to a confrontation between the Board of Directors and the players, and although this problem was resolved, on 1st June 1924, Cardona handed over his position of President to Gamper, who accepted it for what would be the last time.