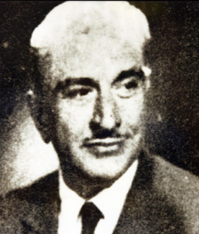 On November 1945, Agustí Montal i Galobart (Barcelona, 1904-1964), presented a motion requesting an end to be put to the provisional nature that the club management had been working under for the last few years.

Agustí Montal i Galobart was an accountant on the board led by Josep Vendrell. The war was over and Montal felt it was time for the club to get back to normal. The board accepted the proposal and announced it to the Catalan Federation, who passed the message on to their Spanish equivalents. Ten months later, Vendrell and his board presented their resignations and the authorities named Montal as the man who was, undoubtedly, the ideal candidate to replace them.

This democratic industrialist became president on September 20, 1946, which signified the definitive start of Fútbol Club Barcelona’s march towards grandeur. During the six years that Montal was in power, Barça consolidated their place among the elite of Spanish football, winning consecutive league titles in 1948 and 1949, the year that the club successfully celebrated its Golden Anniversary.

But the greatest season of the Montal presidency had yet to come. That was 1952, when the club was coached by Slovak Ferdinand Daucik and contained such illustrious names as Ramallets, Kubala, Basora, César and Manchón, to name but a few, and won the League, Cup, Latin Cup, Martini Rossi Trophy and the Copa Eva Duarte. That amazing year has gone down in club folklore as the ‘Barça of the 5 Cups'.

These were such successful times that even the expanded Les Corts stadium was too small to hold the huge number of fans that wanted to watch the amazing team in action. Montal, a great visionary, purchased a new site where, not long after, the Camp Nou would be erected.

On July 16, 1952, Agustí Montal decided to stand down from the presidency after a series of outstanding managerial achievements that have led to him being considered one of the finest presidents the club has ever had, especially considering the difficult times he had to get through.