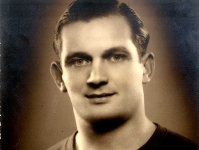 Considered one of the best wingers in BarÓa history BarÓa, VentolrÁ (Barcelona, 1906  Mexico City, 1977) was one of the biggest stars in the team in the thirties.

He was a uniquely charismatic player, and became hugely popular among BarÓa fans due to the handkerchief he always wore on his head. An explosive player, he was amazingly fast and an expert dribbler. He was also good in the air and scored regularly.

He won two international caps for Spain, and his BarÓa career ended in unusual circumstances when he was on tour with the club in Mexico at the height of the Spanish Civil War (June-August 1937) and decided to stay in the country and sign for Atlanta. But his main reason for staying was sentimental, for in Mexico City he had met the niece of the President of the Republic, LÃzaro CÃrdenas, and they got engaged. He had a son, JosÕ, who went on to become an outstanding defender, and played for Mexico at the 1970 World Cup held in his country.