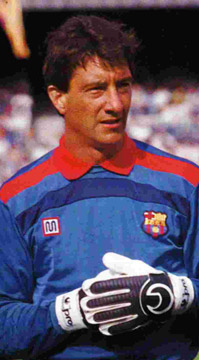 The unforgettable Urruti (San Sebastián, 1952 – Barcelona, 2001) is one of the greatest goalkeepers in the history of the Club and was a key figure in the successful outcome of the 1984/85 league season.

He signed from Espanyol in 1981. He stood out for his agility, spectacular performances, safety, reflexes, leadership qualities and bravery. 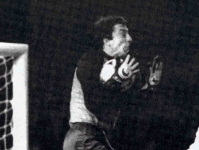 An immensely charismatic player, he achieved the high point of his popularity when he saved a penalty away to Valladolid with the score standing at 1-2. The result left Barça as league champions with four matches still to go. The famous words said at that moment by radio commentator Joaquim Maria Puyal, “Urruti t’estimo!” (Urruti, I love you!) symbolises the adoration felt by the Barça fans. A year later, in the sad European Cup final in Seville, Urruti stopped two penalties against Steaua, but in vain.

The arrival of Andoni Zubizarreta in the 1986/87 season condemned Urruti to the subs bench, from where he continued to lead and help maintain team morale for the next two seasons. He won the Zamora Trophy for the goalkeeper conceding fewest goals in the 1983/84 season, with just 26 goals in 32 matches.